Are dogs emotional?  Do they harbor misgivings?  Do they hurt when one of their pack hurts?   I do not have scientific study that I am aware of, to affirm it, but I believe that they do.   And we, as dog-people can be described the same way.   Remaining calm during stressful encounters is not a strong suit of mine, but I try to channel the Spirit rather than my Sailor’s natural inclinations.  It was especially helpful that I had a time of repentance and prayer with the men of my church earlier this morning.

Dexter, Comet and I had a run-in with a dog-man a couple hours ago at the park.

Two weeks ago at this same park, this same man accused my 6-year old neutered male dogs of biting his female chow in the behind.  Today it began with a look (Oh brother, here we go again).   Today he leveled that my dog(s) caused him an $800 vet charge – for stitches inside and out.  (inside and out??) I calmly but empathetically denied they had anything to do with it.   I mentioned the other dog-people, people he knew, and I were sitting together and it a surprise –  no fighting, snarling, or agitation occurred.   Neither of my dogs had any froth nor blood on them.  He left viscerally upset.  These same dogs TODAY – his chow and my two, showed not the least indication of familiarity or distrust, dominance nor apprehension.   But he was not happy that I would not apologize for what did not occur.   He gathered up his dogs and left again.

Humans are emotional.  In the last twenty years, I have gained some wisdom; now I do not discount a person’s emotional response.  Everyone’s emotion is valid, for them, yet sometimes is out of proportion to evidence.  Perhaps humans have a more enlightened – or a more disturbed nature in 2017.   It is more common today for people to have dogs for emotional or medical support.  Just last week at my church a visitor brought her small dog into the building.  She affirmed that it was a trained and certified support animal.   And I read about a dog trained to assist her human with epileptic seizures.  The dog would alert her human when she detected the earliest onset of symptoms.  He then knew what to do in the moments prior to the seizure.  And last week, I saw a picture online of a street dog that stayed by the side of a companion dog that had been injured.  So I believe dogs do detect and respond to very subtle emotional cues, instinct, and pack-bonding, and remember.  Where some breeds may have certain medical needs due to recessive genes, others may have behavior traits incompatible within certain settings.  Juvenile or older dogs that have been rescued may have a lot of unknown emotional baggage.    But the same can be said for people. 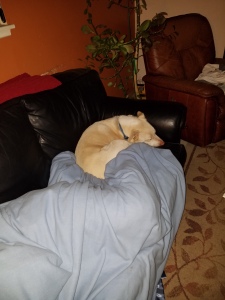 Nature and nurture are always companions when it comes to people and our canine pals.  To complete that earlier thought, “the more I deal with people, the more I like dealing with my dog“.