Sheri is in the kitchen cutting up onions to put in Shepherds’ Pie for tomorrow’s meal.  While I want to help,  I got out of there as I already have eyes stinging from a stubborn cold.   Comet is sitting in the middle of the kitchen floor hoping for any scraps to fall his way.  Good dog!  He will get a dog biscuit and be on his way.

Thinking of onions leads me to thinking of the corner Greek Chicken diner which serves delicious onion rings.  One thought leads to another and as I sit at the computer, I googled ” dogs,  onions”; a dozen or more dire warnings about the toxicity of onions to dogs appeared!    I knew that chocolate was supposed to be harmful to canines , but apparently a sufficient quantity of onions can kill a dog.   ( I guess a small dog tore into a bag of onion rings left on a coffee table and it nearly killed him).  At least an un-cooked onion is unappealing. 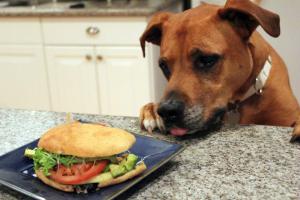 “Onions contain an ingredient called thiosulphate which is toxic to cats and dogs. The ingestion of onions causes a condition called hemolytic anemia, which is characterized by damage to the red blood cells. Onion toxicity can cause the red blood cells circulating through your pet’s body to burst.”