Aggression is not a breed thing. It’s a state of mind, and it comes from how the human is with the dog. There are four levels of energy, regardless of the breed: low, medium, high, very high. The idea is to get a dog in your same level or lower than you. Cesar Millan /   www.brainyquote.com

Neither Dexter or Comet are violent dogs.   Comet does seem to get worked up about anything.  Well, there was that one time over a year ago when a he was accused of being a “biter” – and he’s been around dozens of dogs since them with nary a sniff of interest.  As for  Dexter he is one of those dogs who might do a lot of confidence self-talk  in front of mirrors. As a matter of fact,  Dexter only sounds “scary” when someone familiar comes to the door.  A neighbor.  My father-in-law.  One of my friends.   And then, in a flash, he is a wiggle-worm of “please pet me!”

When something is potentially scary, Dexter will follow my wife or me to the door.   But Dexter gets worked up, and can get Comet a little upset, when my neighbor’s son drops his two dogs – a Jack Russell  and a Mastiff – off with his parents.  C-  deploys often with the Navy, and his dogs have no significant-other  to care for them.   But the Jack Russell is the most foul-tempered thing, and continually gets worked up whenever the dogs or I are out in our backyard. It’s the temperament with this breed.  Worse, this little devil winds the Mastiff and the two Dobermans up to bark.  And then Dexter rushes out and barks through the fence back at them.  And Comet growls.   THE WHOLE DAY!     I think the little Jack has a “Napoleon complex”.  Or desperately needs some real exercise – hourly.

I’ve tried dog biscuits.   I’ve tried little dog treats.  Nothing brings peace until the woman next door calls her dogs back into the house. 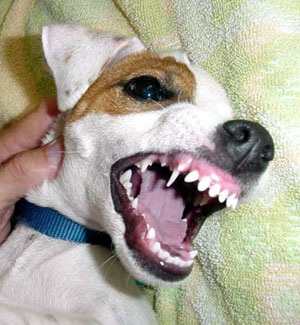 I am not a violent man.   But I am beginning to look for my son’s old pellet gun.   Or maybe toss over the fence some “doggie downers” to calm nerves.  Neither response would be the wisest thing for maintaining the peace between humans.

For my peace of mind I hope C- returns soon to reclaim his monster – and the Mastiff.  Now I have to go do some yoga to find my “center”…..