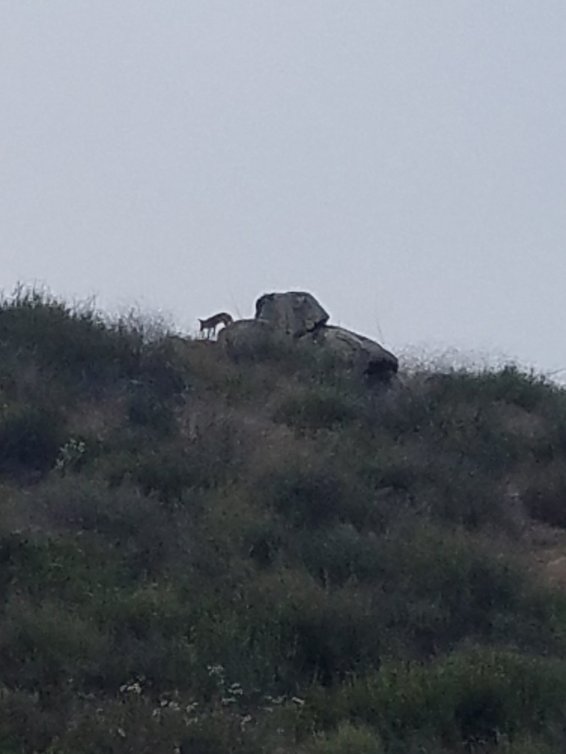 Dexter closely followed by Comet were both happily scratching and sniffing in the hillside bushes  near my home.  If you follow my blog, you’ll know that this particular area called “Rattlesnake Mountain” is our “wilderness” buffer zone between subdivisions. This area,  which until 2014 was an undeveloped ridge, has seen a lot of wildlife but less so in recent years.   After the surrounding East County hills recovered from a wildfire a decade ago, deer and hawks seem to have departed our little wilderness.  Perhaps the new subdivision at the top of the ridge was just too much disturbance.  While the gophers all moved down to the tasty yards of homeowners in our subdivision,  other wildlife has remained in the zone.

For several weeks the dogs and I have walked up to the hills where I can let them run for a little while.  I do not worry about the rabbits, as I have every confidence that neither Dexter nor Comet pose a real threat to them.  ( I have watched a rabbit not thirty feet away go left while the dogs – both – ran to the right.)   Sometimes in the early morning I will hear coyotes so I only put the dogs off leash when I think the coyotes are done hunting.  Not that I think a coyote would really look at a seventy pound dog as a morsel.  Yet I think the coyotes might invite Dexter to come “play” with them and don’t think Comet has either the speed or chutzpah to defend him.

Yesterday morning, off-leash, Dexter was leading Comet toward the ridge line as I watched.  Then my eyes spotted movement ahead of the dogs.   Three coyotes on the ridge trotting near a rock formation.   I called back Dexter and Comet.  Neither one had seen their cousins.

I don’t know who was more relieved, the coyote watching,  or me, in not having to deal with it.

Leave a Reply to B. Cancel reply