A local story of a child bitten in the face by a dog whose human walked off leaving the dog unattended with the child petting it.  Police citing the owner; the child requiring surgery.

Dogs, abandoned and left to drown, chained up in yards in Houston, and in hurricane-flooded  Florida where Harvey and where Irma stormed in.   Rescued by volunteers, animal control officers, and caring citizens.  And absent owners identified — and being sought by the justice system.

Another story -all too common – of a dog dying of heat stroke because the human ignored the warnings, ignored proper precautions, and took the animal on a horribly hot day hiking and without sufficient water.

People who adopt puppies because they watch a popular television show;  however, they abandon or surrender the grown animal to shelters since they are unwilling or unable to provide for them.

Dogs and cats flown out of shelters in the impending hurricane zone(s), and adopted into new homes;  dogs and other pets rescued from the storm find safety in the available room, for their humans to come find them.

Pit bull terriers,  are being adopted by law enforcement agencies  and trained as K9, drug -detection partners.  Animal charities and rescue groups nationwide and overseas are legislatively fighting to overturn hysteria, draconian legislation, and opinion with examples of “good dogs”. 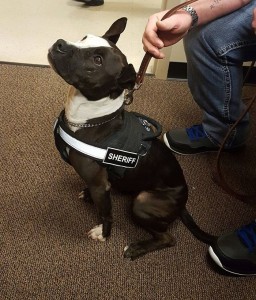 Dogs rescued locally from a drainage pipe they wandered into and were stuck for days.

Retirement – age, Military Working Dogs, K9s,  since legislation passed in 2000, have been selectively been adoptable by former handlers and certain other individuals.   But prior to the 2016 NDAA (Defense Authorization Act) signed by President Obama, military working dogs that were retired overseas, were left behind unless the former handler could pay for the canine’s transport back to the United States. The American Humane Society had paid for several retired MWDs to be repatriated up through 2015, and lobbied for the legislation that was subsequently signed by the President.