This morning I woke before 6 AM, which is “sleeping in” for me.  A cup of coffee later, and everyone else – two and four-legged – still sleeping, it was an opportunity to write.  But not for long with Comet and Dexter.  At least I drank the full cup today before the critters realized I was up.

When I stir in morning, it signals the pre-walk routine is starting.  I gave in. Every morning it’s a football game. I’m an erstwhile San Diego  Charger Philip Rivers.  Pants going on, with Dexter providing the blocking.  Comet, as usual, trying to rush the quarterback.  Today, I had better success but still had a dog between my legs and one harrying me while I laced my boots.

An hour later, I’ve settled back in my writing chair.  My muse is at my feet. The other is stretched out behind he chair on the doggie cushion.   My Missus is blow-drying her hair which signals that the pre-church schedule has begun in earnest. 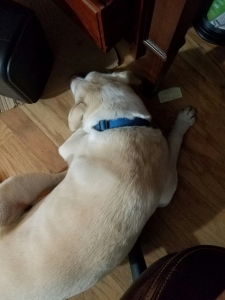 For twenty years now, I have had two routines every Sunday morning.  The first, is a walk with the dogs.  The second is attending church services.  And for the most recent ten years, I have either been an usher – or lead the usher team which has been one reason I am up early on Sundays.   This year we have a rotation for leading the ushers, and I have a respite.   I am not “volunteered” for any set-up activity this morning, so I personally have another hour.  Perhaps that is the wrong word.   “Not in the rotation” sounds appropriate.

I need to get ready.  I need exercise where hypocrites and sinners like me can get a heart check and enjoy fellowship.   Jesus said he came as a doctor to heal the sick:   So now I am getting my spiritual boots on and ready to be inspired.