This week’s Guest Blogger: Everyone Has the Best Titles

I am very grateful to feature an adventure of our favorite resident of Maine, mainepaperpusher, her dogs Walter and Greta, and other critters.

Pigeon Preventers And The Hangry Cats

One might think that keeping cat food where it should be would be an easy task. Even with dogs in the house, most people are quite successful in keeping their cats well-fed and happy. Our cats, however, are food insecure. When I first heard the term “hangry” I thought of my cats. Putting the words ‘hungry’ and ‘angry’ together was brilliant and a perfect way to describe what my poor felines felt about their disappearing meals and the dog burglar who committed these crimes. You’ve heard of cat burglars? Leave it to us to have a dog burglar. His name is Walter. Walter is a Great Dane and when this all began, he was a puppy.

If it isn’t obvious already, Walter LOVES cat food. We have a table next to the window in the kitchen. On this table is a cat bed, and the cats’ food and water bowls. The cats can sleep, eat and watch the birds there. Perfect, right? No, not right. Not right at all! Even though we tried to block the access to those bowls with kitchen chairs, and every other type of obstacle we could think of, every once in a while Walter would sneak in and clean out the cat bowl. Sometimes he’d even drink their water!

When I made a change in the cats’ dining arrangement, all hell broke loose. Since Echo was 18 years old at the time, I figured he deserved a bit of luxury in his waning years. I decided to feed him his favorite soft food. Old age has its rewards and all of that, right? Because Lily, our 11-year-old, tends to be a very hungry big girl (she takes after her mother,) it was necessary to keep the cats’ food dishes separate so Echo could eat all he wanted without Lily’s interference. Great plan, right? Yeah well, not so much.

Trying to keep Walter from getting the dry cat food was a battle every now and then. Trying to keep him from the wet food was war. Constant war, at that. I thought I could outsmart him, though. I’m smarter than the average Dane! Yeah well, maybe not so much. It seems that Walter is not an average Dane. So what next?

I had some shelves in the kitchen corner and I should have known the shelf wasn’t high enough. Still, that worked for a while till Walter was tall enough that he could reach it. Next, I got one of those little plastic drawer affairs to put on top of the shelf. You know the ones where you can add or subtract drawers to your heart’s content. There wasn’t going to be any subtracting here…I kept adding drawers and the cat food rose higher and higher, but I still found the cat dishes on the floor and they were so clean that I could see my reflection in them.

As this process unfolded, poor Echo practically needed an oxygen mask to climb high enough to reach his food bowl. It was about five feet off the floor and Walter was still getting taller. As fast as I raised the bowl, he grew enough to reach it!

Then I had an idea! I was actually pretty smug about it, too. I took the top off of the set of drawers and put Echo’s food inside the top drawer. That way Walter would have to climb five feet and then go up and over the side of an 8″ drawer. My smugness was short-lived. It wasn’t long before he figured out a way to outsmart me and Echo continued to be calorically deprived.

Then Walter started reaching beyond the drawer! There was a little shelf on the wall where I kept the cat food cans. One morning I got up and found these on the floor…

Walter had figured out a way to take the tops off those cans and then he chewed them into oblivion as he got every last bit of cat food out of them. How he didn’t lacerate his tongue or his intestines, I will never know. Those cans of cat food were nearly seven feet off the floor! How was I ever going to thwart him? When people are fed up they often say ‘enough is enough’ but in this case, enough was more than enough! This was beyond enough. I started to scheme until I had another idea. I wasn’t smug this time, I was merely hopeful.

My plan was to put the cat food in its usual place, put a mousetrap next to it and then put a newspaper over it all. My theory was that if he got up there, he’d spring the mousetrap, it would snap up and make a racket against the newspaper and scare the heck out of him! Bill reminded me that a 19-year-old cat might have a heart attack if he happened across my trap before Walter did. Bill had a point, but I was undeterred. There had to be a way stymie this ever-growing dog. I needed help to implement my cunning plan. There was only one place to go. I went to the hardware/farm store.

The people at the store are very nice. They never look at me like I’m an idiot when I ask crazy questions. I might hear a snicker or two as I’m leaving, but they never do it to my face. I appreciate that in hardware/farm store people. Anyhow, I explained my predicament and asked where the mousetraps were. I was desperate. If I had to, I’d take the cats to another room for a night or two and put my devious plan into action. The gal who works there nodded her head as though I wasn’t crazy at all. She was giving me one of those ‘smile and nod’ looks when suddenly, it was obvious that she’d come up with a crazy scheme of her own. Did she take me to the mousetraps? No! She took me to see a product called Bird Be Gone!

At first, I didn’t understand. Then she opened the box and took out these spikey things they put on house eaves to keep pigeons away. Pigeon preventers! They had both plastic and metal versions. We opted for plastic since there was the possibility of impalement with the metal ones. At this point, I thought a good bit of impalement was just what Walter needed! Once I put those evil thoughts out of my head, I went home with the plastic pigeon preventers and some velcro. This is what they look like… 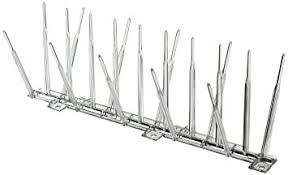 My theory was that if he got his collar caught on the pigeon preventer and the little plastic prongs didn’t snap, the velcro would come apart and he wouldn’t be left hanging there. See? I really didn’t mean him any harm! However, at this point, it wasn’t about the cat food anymore (sorry Echo.) This was about me trying to keep one step ahead of Walter. This whole Great Dane outsmarting his owner thing was going to stop!

That night I put a strip of the pigeon preventer spikes on the front of the drawer in which I fed Echo. There! If Walter wanted to get up there, he was going to feel plastic spikes against his neck and back off. That ought to stop him! It didn’t. The next morning, the pigeon preventer was on the floor.

The next night I not only reinstalled the first preventer, but I put a second one up there for good measure. The next morning I was thrilled to see that the cat dish was where it belonged and all was well with the world. I had thwarted Walter but good! His days of cat food burglary were over! And for a few days, I really thought that was true. I was wrong.

It wasn’t long before I woke up one morning and walked into the living room and found Walter chewing one of the pigeon preventers like it was a dog toy. When he saw me, his face was a tapestry of emotions. I saw surprise, guilt, sheepishness; but most of all, I saw triumph. I quietly went into the kitchen, picked the cat food dish off the floor, and went straight back to bed.

In the tried and true SHAMELESS BEGGING fashion as mentored by EVERYONE HAS THE BEST TITLES ,   I am asking for submissions to be a guest on my blog!

Add a few details about you,  how you got started and what your blog is about.

Send me a link to your post at notdonner9@gmail.com

I will publish future Guest Posts on Thursdays under the category, Hair of the Dog.