I think it was late  in my high school years that I really became a fan of the writer John Steinbeck.  As many my age may remember, we all read – or watched the classic movies made from his works – The Grapes of Wrath or Of Mice and Men.   I went on to read  Travels with Charley.   My wanderlust began decades ago with dogs as companions.

As a child  my parents would pile me into the ’66 Mustang with Nicky, our poodle, and we would drive from the Bay Area to a cabin near Lake Tahoe, or to Santa Cruz by way of forested backroads and coast highway.  With my father’s work, and later my parent’s divorce, I moved around in that car often.  My dad’s work sent him one year to Georgia;  we piled into the Mustang with Nicky and a Siamese cat.

Frequently stopping- my mom’s insistence –  I vaguely remember the Southwest, a bison, Texas and a plantation in Georgia that I think might have been a location for Gone With the Wind.   Later, as a adult, I would see some of these sights again (and having a strange feeling of deja vu).  Then as around the time I was about middle-school age, we crossed-country again but without dad.

From Cape Cod, Massachusetts, my mom, sister and I, with Tippy, our mutt/ Shepherd mix would take road trips to the western mountains of Massachusetts or the White Mountains of New Hampshire.   And then, mom a Nurse for twenty years, got a romantic notion to obtain an education in English Literature, and we were off to Tucson, Arizona. Tippy went to a new home on the Cape with a family friend.  Five years later, as a means of getting out of  Arizona, the Navy appealed to my wanderlust.

I soon bought a 1973 Chevy Nova in Florida,  and for ten years, it took me from Florida to San Diego, and as far as northern Idaho and Tucson.  It was ten years after that, in 1995, I adopted Happy, my Newfie -mix, and we would travel the Mid-Atlantic states, into the Blue Ridge mountains, to West Virginia and then on a cross-country move to San Diego.

That’s when I named my truck Rocinante. 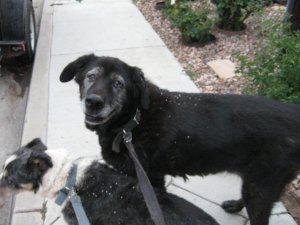 Happy was considerably larger than Steinbeck’s poodle, but despite his disposition,  I never had any issue with pulling off to the side of the road and dozing in desolate places.   We saw a lot of the U.S. in that truck.

Once in San Diego,  when I had a deployment – three to six months away from home,  I would take two dogs –  Sydney was adopted to give Happy some company –  to my mom’s desert ranch.  Sydney would bark excitedly for hours on the 400 mile drive to her home.  I rarely took both dogs on a drive after that first experience!

When Dexter, and since last winter, Comet and I go anywhere together,  it is generally in our backup commuter Ford Focus.  We do not take many adventures -age, work, and financial obligations temper that, but they treasure going to the park or to the groomers. And so do I.

Thanks to mainepaperpusher whose blog post, Franny, got me thinking about what vehicles I ever named, and this story.