With a little bit of a two-beer, morning-after headache (My celebratory evening out with our friends last night did not resemble “drinking” as sailor lore would have you think), I was roused without the excited pawing, cold nuzzles and whines today.   As friends of ours had returned from a European vacation this week, we altered the Saturday routine by leaving the dogs at home.  We instead met for a hike, prayer and great stories.

I also had the opportunity to vacuum the dog-car on my way back to the house.  Sort of ashamed by the state of the dog-car and had to repent.  (It was my mechanic who chuckled when telling me that his helper was a bit put out last week because clouds of dog hair wafted up during the road test of the Ford.)  I knew ahead of time that the cleaning was only an  opportunity to get new layer of hair and dust in the car.   And as it was so much warmer than the Mission Trails Park, the air conditioning was blasting as best it could and the dogs were slobbering.

The dog people I’ve met at this park are as good-natured as their dogs, and good conversationalists as well.  While all our dogs were running about – her dog was a female basset hound-mix – we chatted.  I said that I got a lot of ideas for my blogging, and yet probably unusual for an engineer.  She remarked that she had worked for engineers some time ago.  She told me about naming dogs and cats after literary people, and even had created a Facebook page for her basset.

Apparently, she had to be creative about including some people in pictures as FB was not allowing animal Facebook pages to be created.     And then we talked about the challenge that her daughter had with taking in a stray Chihuahua pup some time back.  It has some habits that were a little disturbing requiring the family to monitor the dog in parks, and at home regarding the cat litterbox.   I do not have that sort of compassion.

Then a gentleman arrived with his two gentle Great Danes.  One, he explained was deaf from birth, but seemed perfectly content to sit – one haunch on the concrete picnic bench next to me and get pettings.  Comet must have understood as he would catch her eye but not let Dexter bound into her.  I am grateful that all the dogs had a calm spirit.   Comet and Dexter were getting a lot of socializing and exercise.  A Jack Russell puppy bounded over with no issues with the big dogs.  I was glad to see that both of my pack have no issues with dogs – small or large**. 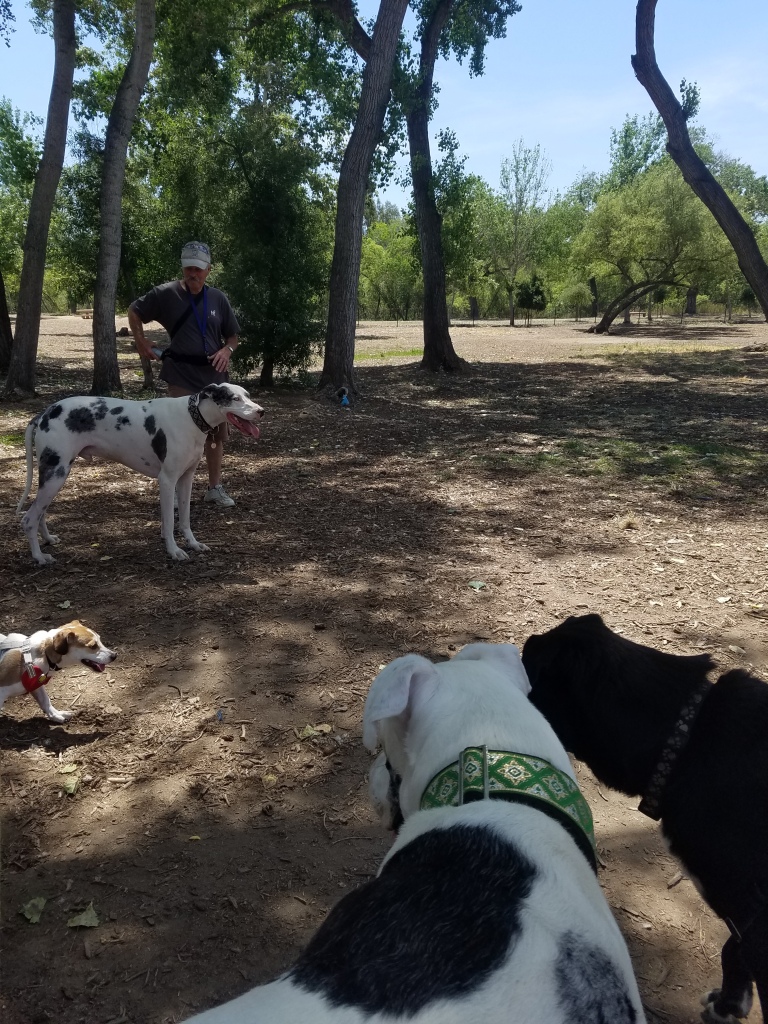 As the dogs bounded over to a woman with a dog at the far side of the dog park.  I could see the woman pick up the dog. Squirming and snarling even as the Danes, Comet and Dexter were still 25 or 30 feet away.  “Psycho doesn’t like a lot of dogs. He’s a bit nuts”, the man with the Jack Russell puppy explained.   So, the self-explanatory psychotic dog with the woman and the even-tempered man, with the sweet puppy came in together.  Opposites attract I know but that seemed a little unusual.

** But that doesn’t extend to my neighbor’s dogs.  I actually think the territorialism that his two Dobermans and Dexter and Comet have, is a direct result of his son’s girlfriend’s Jack Russell.  As a puppy something happened between it and Dexter one morning, and it was emotionally if not physically, scarred.  And when the son visits his parents with that dog, it winds every dog up and barks during their entire time outside. 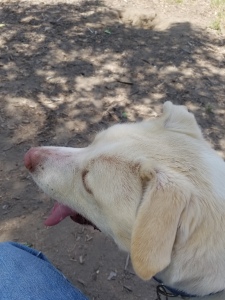 Author’s apology: As I started to write this post, I was enjoying a near-perfect day.   With today’s post nearly completed,  I hit a key that deleted everything and then SAVED the deleted screen.  So I am having to recover that good dog attitude.