It all began innocently enough a couple years ago.  We bought Dexter a stuffed plush toy fox.  Sitting in the living room with friends or perhaps watching television,   he would drop it in someone’s lap.  After everyone tossed the toy to him, we would make the effort to ignore him. Perhaps a longer evening walk was needed I thought. 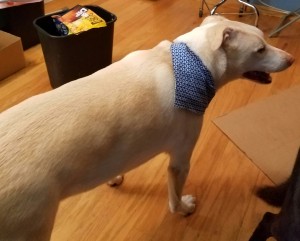 Only later did I start to question whether Dexter was manipulating me the whole time.

While I have never succeeded in teaching Dexter to fetch a ball — return it to me,  he does seem to have a food-centric learning curve. Toenails clicking on the ceramic dog dish – a distinct bell-ringing sound –  earns a little food.  When this stopped eliciting a response either from my wife or me,  the bowl would be slid along into the middle of the tiled living area.

I wonder if Pavlov noted this in his research.  Perhaps the dogs were testing him?