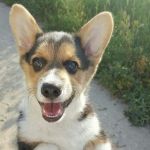 Life poses certain challenges when you stand eighteen inches at the shoulder.  Doggie doors. Large dog biscuits.  Playing bumper-butt with another dog.  But there are advantages, too.  A coffee table that is “right-sized” to go under if you are a Corgi.  Playing “catch me if you can” at high speed in a living room.  A cuteness factor that fascinates Dexter and Comet but especially Comet.

Tuesday night’s dinner guests were a married couple and their Corgi, Bruce, which is not unusual considering we are all dog people and friends at church.  It is akin to young marrieds with small children, all getting together for a dinner party. If you have raised children then having little ones around – and rambunctious – is not an issue.  If you have dogs which act often like small children, then having rambunctious pets underfoot is also taken in stride.

Though they probably do not recall it,  both dogs have spent an a summer afternoon with Bruce before.  It was a time my church group “Empty nesters” met at the cove for a bonfire and fellowship.  Until somebody (well, two canines) peed on a chair — and one – didn’t see the unfortunate occupant of that beach chair.  But I did not bring that up last night.  We did not have beach chairs last night – and nobody made any deposits -indoors. Thankfully.

Dexter was obviously the one of my two who most enjoyed and easily “grooved” with Bruce.  Though Dexter is three times his size, he loves play as much.  And yet Comet, who is four times his size was, at first, that big kid who is not quite coordinated enough to play ball with the other two kids, but is enthusiastic and runs after the other two.   Comet was dashing and prancing in the living room until everybody settled down to dinner.

For several months we have been wondering whether we should replace that coffee table which would be more appropriate in a living room that approximates the area of our entire home, rather than its present size.  But I keep it for earthquake or incoming Nuclear Missile protection.  If only we could crawl under it.   But for our visitor yesterday it has the perfect dimensions.

And since our guest, Bruce, is an internet sensation (Instagram), I for one am glad that he enjoys our rather ordinary company.  A big head would never fit through the doggie door or crawl under our furnishings. 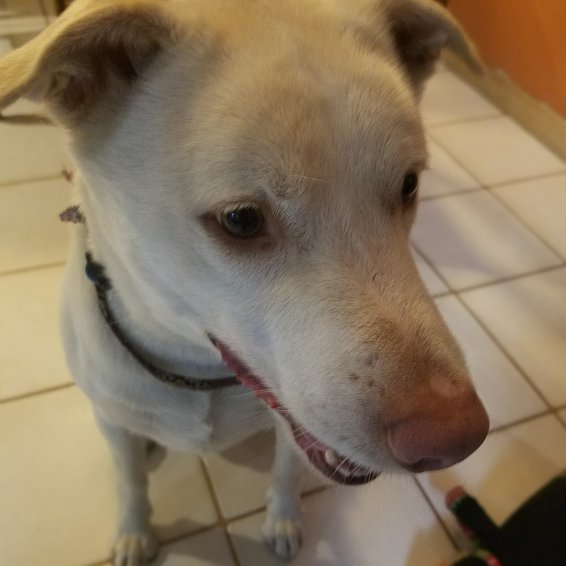